In 2015, the population of the Greater Toronto Area cracked 6 million people. That is more people than the whole of British Columbia and accounts for 29% of the total population of Canada. According to Statistics Canada, only 20% of Canadians live in rural areas. (I can’t wait to hear the update statistics coming out of our first real census since 2011.)

I am one of the 80% of Canadians who grew up and currently live in an urban area, which is why I am always bothered by children’s books that paint rural life as an idyllic paradise and city life as nasty, brutish and short.

Yes, yes, pros and cons for both choices exist, blah, blah, blah, but in the world of children’s literature, I come across proportionally more rural-based stories or read negative portrayals of cities and city life more often. Which brings me to the classic Aesop Fable The Town Mouse and the Country Mouse. 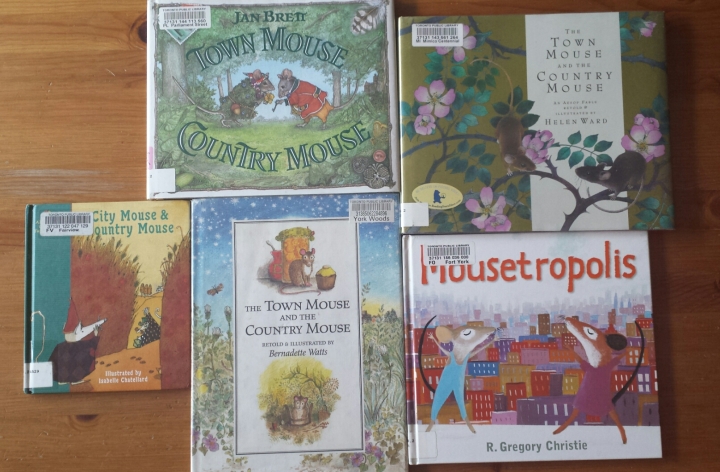 In the original tale, the city mouse scoffs at the country mouse’s simple meal and offers an invitation to the city. Upon his arrival in town, the country mouse tastes rich food but is almost killed by dogs while eating and decides he was better off with his simple, safe life in the country and returns home. Most modern adaptations take a to-each-his-own approach, but an undercurrent of rural superiority still remains. 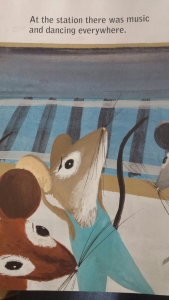 The music is too loud in the city

In the beautifully illustrated version by Helen Ward, the only hint of difficulty to rural living is “the aching hunger of a long, cold winter” and the cons of the city outweigh the pros. The story in Mousetropolis by R. Gregory Christie is more balanced but the illustrations don’t always support the city’s advantages. Jan Brett’s take is the most even of the ones that I’ve read, and the illustrations, with detailed, supporting stories in the margins of the page, complement the main narrative well without making a judgement on the mice’s choices.

I doubt my kids notice these distinctions overtly, my five year old prefers one of the more traditional tellings because he finds it funnier, but as city dwellers we have a surprisingly difficult time finding books reflecting our kids’ experiences. My three year old loves Toronto ABC by Paul Covello because he visits the places mentioned in the book. Some of the great ones we’ve come across in recent years include Symphony City by Amy Martin and Sidewalk Flowers by JonAron Lawson, illustrated by Sydney Smith. As the kids get older, we make a bigger effort to find overtly pro-urban stories, which portray cities not as places to overcome but places full of wonder, experience, and growth – just like the city we call home.

Tales from the mouth of a wolf

You Knew What I Meant

Minding other people’s language. A lot.

Live to Write - Write to Live

We live to write and write to live ... professional writers talk about the craft and business of writing